Bernard Hinault immediately won at his debut in the Tour de France in 1978. The versatile Bernard Hinault won the Tour de France no less than five times. Jacques Anquetil, Eddy Merckx and Miguel Indurain also won the Tour five times. The 1978 rider started in the Dutch town of Leiden. Pollentier was caught on doping during the Tour and was evicted, Henny Kuiper fell and had to give up. It went at the end between Bernard Hinault and Joop Zoetemelk. The decision was made in the last time trial, Bernard Hinault won his first Tour de Frans. Here the replica of the yellow jersey of Renault Gitane from 1978. Attention: It's a bit smaller. When in doubt between two sizes, choose the largest size. See size chart for dimensions. 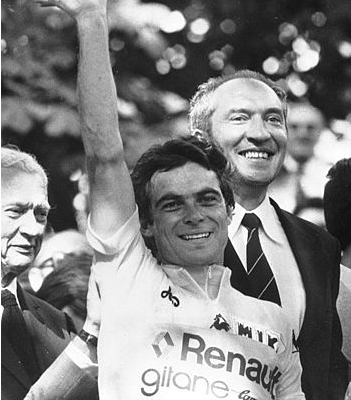 Bernard Hinault in the yellow jersey of Renault