Eddy Merckx is the greatest rider of all time. His record is unsurpassed, the 'cannibal' won no less than 445 victories as a pro. Not for nothing was Eddy Merckx proclaimed a cyclist of the century and was elected Sportsman of the World three times. All-rounder Eddy won the Tour for the fifth time in 1974. If Eddy hadn't let the Tour pass him by in 1973, the counter could have been six. Only Jacques Anquetil, Bernard Hinault and Miguel Indurain also won the Tour five times. But Eddy's honorary list is unrivalled. 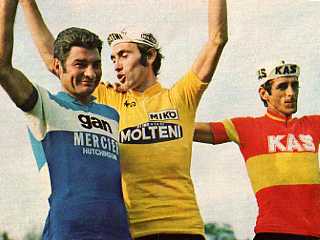